Although Juno makes coding on iPad a breeze, there are still some tricks you need to know — one of them is working with the file system and handling paths. For example, when your code is supposed to read file’s contents or write data to a file, how do you specify file’s location in iOS?

Manipulating file system paths in iOS and iPadOS (we will refer to both as iOS from now on) is actually fairly straightforward and similar to how it’s done, say, on a Mac — with only few peculiarities. Generally, you can assume that all the usual rules apply, with two key differences:

By default, apps can only access their own virtual space in device’s file system, commonly referred to as app’s sandbox directory, or sandbox; you can find it in Files

as a folder with the app’s name and icon in your on-device storage (technically, this is only the user-accessible part of the app’s sandbox, but let’s ignore this for now). This is the part of the device’s file system that the app “owns” and has full read and write access to; this is also where Juno puts its introductory notebook and creates /site-packages directory for your own Python modules and packages. The main reason those files are where they are is because Juno can be sure it will be able to access this location no matter what.

However, iOS also lets third-party apps access files and directories in other locations (e.g. iCloud, or even other apps’ sandboxes), as long as you, as a user, explicitly grant access to them in the app. For example, when you open a Jupyter notebook with Juno, system automatically grants Juno access to this file, and any changes you make will be saved to the notebook’s original location — just like on desktop.

It’s all well and good if you are only interested in the document contents, but what if you also want to access the folder where the document is located? This is a very common scenario in Juno: when you run code in a notebook, you usually want to be able to access the notebook’s directory, too — for example, to read a .csv file, or save a plot image. But, unless your notebook is in Juno’s sandbox, system will not grant Juno access to the file’s directory automatically.

When Juno detects that it doesn’t have access to the directory of the notebook it is running, it will give you an option to select a working directory, suggesting location of the notebook file by default.

Tap Select Working Directory, and a system folder selection dialogue will appear, letting you explicitly grant Juno access to the notebook directory (or any other location). Juno will automatically set selected location as notebook’s CWD and associate it with the notebook, so that you won’t need to repeat these steps next time you open it.

Please, mind that it may not work if your notebook is located in a cloud storage — for example, granting access to directories will work with iCloud, but not with Dropbox or OneDrive. This is because some cloud storage apps don’t fully integrate with Files

on iOS, and file system functionality that will work in Juno goes only as far as their developers chose to integrate with the Apple’s APIs. Hopefully, those cloud storage services will finalise their Files integration eventually; but we are looking into workarounds, where we could potentially integrate with some of them bypassing Files app.

Although you will find that absolute paths on iOS look similar to paths on a desktop OS, such as macOS, you shouldn’t rely on them too much — because they are not permanent, and occasionally get updated by the system under the hood, even if you haven’t moved the file. Here is an example of an absolute path of a file in iOS:

This file is located in the sandbox of an app, and the identifier in the middle of the path (76FB...FA97) specifies this particular app’s version. However, this identifier is not linked to the app in general, and may change at some point — for example, when the app is updated.

Don’t worry about this too much — as long as you use relative paths in your code, you should be fine. Juno sets CWD to notebook’s directory by default, so simply remember to reference all locations relative to where your notebook is (or to its CWD, to be precise). Take this line from our introductory notebook, for example:

The notebook sits alongside /welcome-data directory, i.e. they are both located in the same folder — so instead of using directory’s absolute path, you can simply refer to the .csv file inside it with 'welcome-data/iris.csv'.

The concept of current working directory (or CWD) is important in the context of using relative vs absolute paths in Juno. You can think of CWD as a directory where the Python interpreter associated with your notebook’s kernel is running in. So, when you want to specify a particular file system location in your Python code — say, a file to read from, or write to — you can do so with respect to your working directory, and Python interpreter will be able to locate it without further clues. If your notebook’s CWD is set to your notebook’s directory, you can simply refer to files located alongside your notebook by their name, e.g. ‘data.csv’ — similar to the read_csv(...) example above.

You can also change your notebook’s working directory manually at any time — perhaps, you would like to access a file in a completely different location rather than where your notebook is. Select Change Directory in the 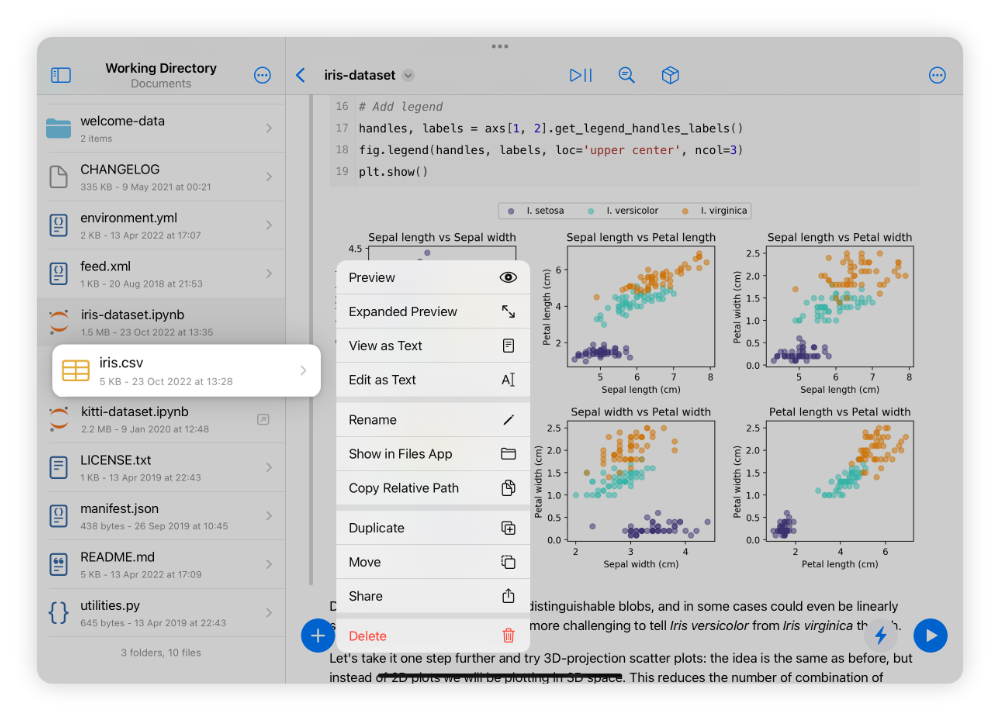 Juno makes working with the file system while coding in a Jupyter notebook as seamless as possible. It shows the contents of working directory next to the notebook content, letting you do everything without ever leaving your coding space: manage files and folders, quickly retrieve relative paths, preview all standard file types, edit any text-based files in a built-in text editor with syntax highlighting, and much more. You can read more about the working directory browser here: Working with notebooks in Juno.