Although Juno ships with a few important libraries pre-installed, such as SciPy, NumPy, Matplotlib and Pandas, you can also install additional pure Python modules yourself. To make this process a bit easier, Juno comes with a package installer, letting you browse and install packages from PyPI (Python Package Index).

There are two ways to install additional pure Python packages in Juno: 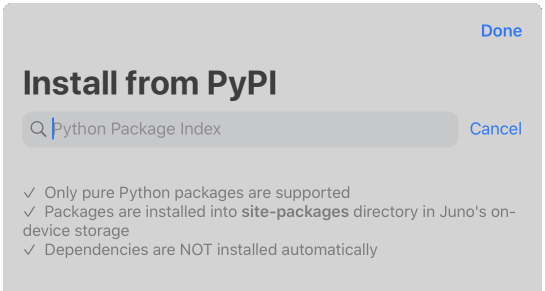 Juno’s package installer is supposed to make installation process a bit easier. Simply provide package name in the search bar (the name you would otherwise use with pip command), and Juno will fetch package details from PyPI and, if it has supported distributions, will attempt to install it to your iPad or iPhone. 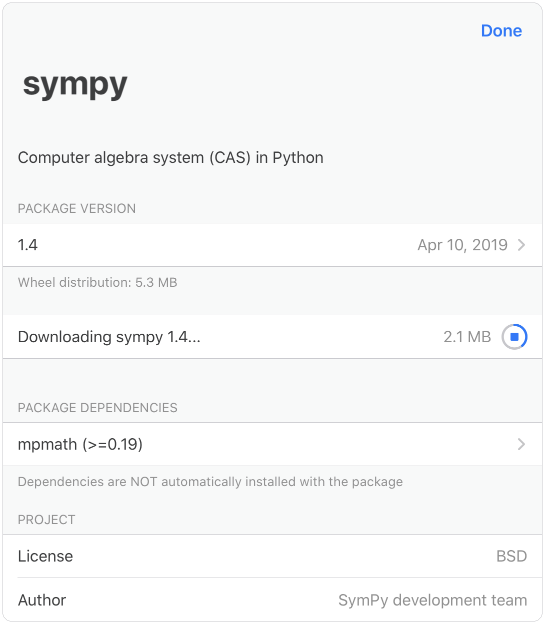 Due to platform restrictions, only pure Python packages are supported — i.e. those that consist exclusively of .py files. If a package relies on native extensions, which need to be compiled for a particular platform, Juno will either display a “No supported distributions” message, or will fail to install the package with an error. Due to restictions above, only purelib Wheel and source Egg distributions are supported.

Juno installs packages into /site-packages directory in Juno’s on-device storage — into the same location where you can install packages manually.

Juno’s PyPI installes does not install package dependencies automatically, you will need to install each one yourself. Juno will try to list dependencies on the package page, and will let you select and install each one individually. You may do this while other packages are being downloaded or installed, all of them will be handled concurrently.

Since Juno doesn’t keep track of previously installed packages, removing them is a manual process — you can do so by deleting their files and/or folders in /site-packages directory in Juno’s on-device storage.

Juno’s package installer is clearly not a package manager, and does not let you manage previously installed packages or dependencies (although this is certainly something we will be working on). You can think of it as a completely “stateless” installer, which is not aware of what is currently installed, and which simply overwrites whatever happens to be in /site-packages with every installation — leaving package management to the user.